Louise P Sloane:  For the Love of Color

Spanierman Modern is very pleased to announce its first solo exhibition of Louise P. Sloane in Miami. You are invited to the opening reception on Thursday, February 7th, 2019 from 6-8 pm. Please RSVP here.

Sloane’s work at first blush seems confectionary in nature because of her choice of color and texture.  Upon closer, more serious examination, it becomes clear that her work is characterized by rigorous attention to formal elements such as color, shape, balance, and depth.

Sloane has continued to develop a unique composition, which straddles the lines of Minimalism, gestural abstraction, and Color Field painting.  Commonly rectangles are divided into quadrants, with a square in the center, comprised of high key complementary colors.  All are filled with dense lines of what resembles cursive writing, arranged horizontally on the outer quadrants and vertically on the inner square. Color, for which Sloane’s work is perhaps most celebrated, here attains an unprecedented luminosity.

Louise P. Sloane’s painting emanates from a long and rich tradition in art history. The visual language of her paintings embraces the legacy of reductive and minimalist ideologies while celebrating the beauty of color, and a human affinity for mark making.

In the second quarter of the nineteenth century, J.M.W. Turner pushed the limits of using dramatic color.In 1839, a French chemist named Michel Eugene Chevreul published his treatise on the vibrant interaction of the complementary pairings of color, which include, red-green, orange-blue and yellow-violet. Monet rejoiced in the complementary colors’ tendency to reinforce one another, painting red poppies in green fields. It was in this vein that van Gogh, after painting The Night Cafe in Arles, explained to his brother Theo, "I tried to express the terrible passions of humanity by contrasts of red and green."

Georges Seurat evolved a system. An honorary founding father of Op Art, Seurat painted dots in colors he knew would dissolve, or 'optically mix' in the eyes of the beholder. The Fauves, and especially Matisse, took the next step, severing color's dependence upon nature. After World War II, the Abstract Expressionists liberated color once and for all from representation. Mark Rothko aspired to paint tragedy in brooding tones of purple.  After ten intensive years of achievement, the works of Pollock, Rothko and de Kooning spoke for themselves.

Painters that came of age around 1960 were determined to go in the opposite direction. Some of these artists spoofed the new consumer culture, while others ignored it. All of them responded to the arresting colors and hard edges of its graphic design.   They accomplished this by employing all kinds of abstract forms and color contrasts that stimulated the partnership of eye and mind. Many artists experimented with one or more 'Op' techniques, as they came to be called, in exactly the same creative spirit that many twentieth-century painters and sculptors studied Cubism without a thought of becoming 'cubists'.

Louise P. Sloane joins the ranks of a small but mighty group of great artists including Ellsworth Kelly, Piet Mondrian, Mark Rothko, Richard Anuszkiewicz, Anton Albers and Barnett Newman. Like these monumental artists before her, she has dedicated her life's work to explore the limitless possibilities of a single theme; an insistence on color 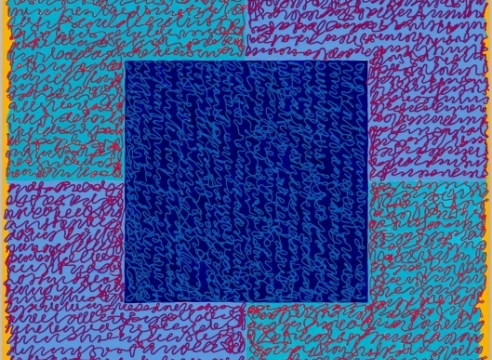