Throughout her career, Louise P. Sloane has challenged herself and evolved, guided by her pursuit of geometry and color.

She has always been fascinated with color, geometry, patterns, texture, and language. From 1975-1989 she painted in beeswax, creating works that diffused light while enhancing the luminosity of monochromatic colors. From 1990-2002, she experimented with a new painting style, using acrylic mediums, paint, and pure pigment powder to create highly textured paintings. These works were typically divided into rectangles or squares that had over-all patterning infused with abstracted text.

Sloane’s affinity for creating depth with abstracted text grew to be a dominating feature in her work. As this new methodology progressed, her source material expanded from random phrases to highly personal and emotionally charged passages. In 2002, after having a conversation with Richard Anuszkiewicz regarding the use of optically charged color, Sloane’s work took another leap forward, and she began to use bold, bright colors.

Firmly rooted in the modernist tradition of minimalist and reductive painting, Sloane’s work is influenced by titans like Josef Albers, Frank Stella, and Richard Anuszkiewicz. The grids in her paintings have always acted as foundational structures, as if they are firmly planted by gravitational forces. One of the most visually pleasing aspects of her work is the juxtaposition of this stable composition with a joyous use of colors that bounce off one another, seemingly trying to break free of the confines of the canvas.

Sloane’s new body of work continues to explore the ideology of breaking free from the confines of the material world. In 2019 and 2020, inspired by both Hilma af Klint and Kazimir Malevich, Sloane began experimenting with a wider color pallete and new geometric forms. The rectangles and squares that have always felt anchored to the center of her paintings have now become untethered. These shapes now feel weightless, unbound by the gravitational pull tugging at them from the grid upon which they appear. The buoyancy of these geometric forms creates a tension within the rectangular grid, and they feel as if they might float off the wall.

“The visual language of my paintings embraces the legacies of reductive and minimalist ideologies, while celebrating the beauty of color, and the human connection to mark making. The way the brain registers color, movement and spatial/geometric relationships is at the heart of my work.”

Louise P. Sloane received her BFA from School of Visual Arts and lives and works on Long Island, NY. Her paintings have been collected and exhibited internationally at museums and galleries. This is the third solo exhibition of Louise P. Sloane’s paintings at Spanierman Modern. 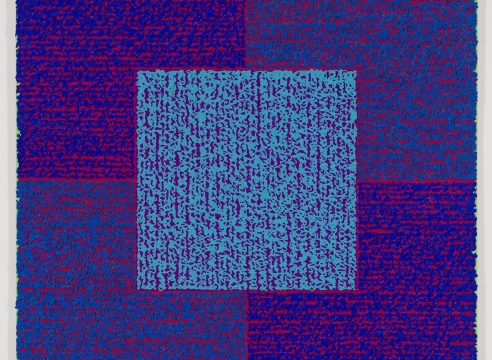