Katherine Parker follows in the tradition of the great modern masters of Abstract Expressionism. Some of her works are heavenly, ghost-like, and ethereal, while others seem heavy and earthbound Her work appears to flow from her effortlessly. Yet, it is the evidence of her process, and the strength with which she paints that makes her work so compelling.

All of her works are emotionally charged brimming with emotional content.
Although Parker is influenced by the attitude and rigor of the New York School, she strives for an expressive vision that is modest rather than sublime. She says, “My paintings are a recording of the quiet and personal—moments of everyday life filtered through the particular and profound.”

One of the recent paintings I completed was “All that Follows”, a piece that shifted through many incarnations and directions before I resolved its central theme. This painting was one of the last of my “Ghost Town “series, a group of paintings where I used white, blue and grey to render dissolving forms. With these works, I wanted to suggest the impermanence of memory, the passage of time and most crucially the contrasting coldness and warmth of loss. I thought of the white backdrop in this piece as a wall or tablet and the shifting marks and shapes as messages that continually slipped in and out of focus. At times I turned the painting upside down and on its side in order to work on it from different angles. I was trying to capture its essence and it took awhile.

As I applied different colors and washes to the surface the mystery of the painting started to be solved. A template began to emerge. I experimented with various grays and whites to suggest shadows and fading forms. I used charcoal and smudges to imply language. Two blue squares, part of the original drawing, were dripped with turpentine which flowed lines to the bottom of the canvas. This gave the painting the structure and energy it needed. The tension between permanence and change was now complete. “All that Follows” suggested itself to me as a title just as I finished.

One of the reasons I love to use oil paint is it holds the memory of each color, layer, and brushstroke. Sometimes a shape or form can live under the surface and stubbornly inform the direction of a painting, suggesting itself over and over. This was true in the painting “FireWall” which started out as a much different painting. As many layers of color were applied the painting began to turn red and redder. Red is a difficult color, it loses its vibrancy when used over a large surface. Halfway through the process, I realized though it was going to be a large and wholly red painting, so I purchased more and more tubes of cadmium. There was a square that was built up from earlier that became my focal point. The trick was to integrate the square into the whole and I became obsessed with getting the reds to bleed and glow with equal intensity over the entire field. In the end, I used solvents to dissolve the paint over some areas and black lines drawn with charcoal to firm up others. As I looked at the finished piece I realized I had created a bulwark of pure color. I felt the title “FireWall” implied power against vulnerability and structure in the face of dissolution, so it seemed an appropriate title for this massive red piece.

As always when I paint I learn and relearn the same lessons.T he first lesson is that the answer is there if I have the patience and faith to stay with the process. The more I try to exert a preconceived form onto the piece the more I lose the truth of the painting. The second lesson is it always takes failure to reach success. The beauty of this kind of painting is embedded in the journey, and like all beauty, it is elusive and must be discovered. 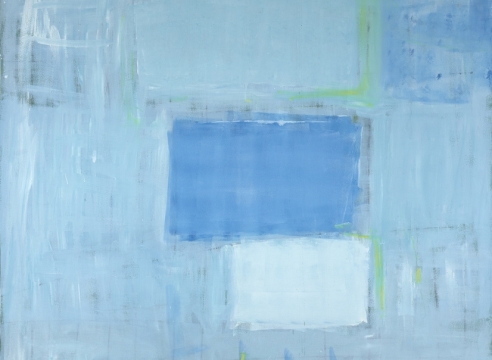