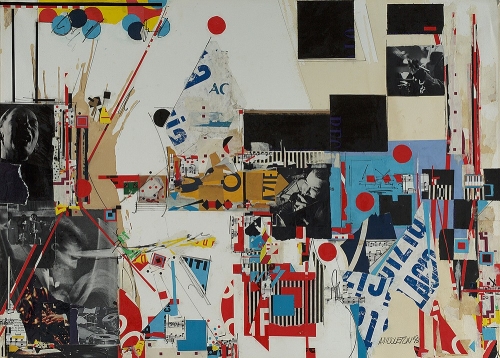 Middleton’s story mirrors that of many African American expatriates in Europe. He lived and worked in the Netherlands for more than half a century, but he was born in Harlem in 1927. Growing up at 140th Street and Lexington Avenue, the Harlem Renaissance was in full swing and as a young man he took advantage of the vibrant cultural scene, frequenting the Savoy Ballroom. His exposure to 1930s jazz greats including Duke Ellington, Earl Hines, and Count Basie, had a profound influence. Along with classical music, jazz remained a passion throughout his life.

In “Painting in Sound,” a 1985 essay by John A. Williams published in Black American Literature Forum, the professor of English and journalism at Rutgers University writes that Middleton “thought then that the music was so fantastic that it ought to be in color.” Williams quotes Middleton: “For me, improvisation is a galaxy of color. When I listen to music I feel like a soloist. I hear and see color, and I make notes…”

In 1944, at the height of World War II, Middleton joined the Merchant Marines. He was just 17. He returned to New York in the early 1950s, settling this time in Greenwich Village, another neighborhood wholly defined by its creative culture. There he formed friendships with New York School artists, Robert Motherwell and Franz Kline, among them, and on the Lower East Side hung out where jazz legends John Coltrane, Thelonious Monk, and Charlie Parker performed. Meanwhile, he nurtured his own practice.

JUST AS THE CIVIL RIGHTS MOVEMENT was getting underway in 1955, Middleton sought intellectual and creative freedom beyond America’s shores. Eventually, he settled in Holland in 1961. While he embraced the Netherlands, shedding the burden of race and longing to succeed solely based on the merits of his work, Harlem remained on his mind. His late 1960s and early 1970s figurative abstractions paid tribute to Duke Ellington, James Baldwin, and Nina Simone.

Williams opens his essay about the artist by describing his life and reception abroad two decades hence:

“Sam Middleton arrived in Holland twenty years ago with one suitcase, after hitches as a waiter and merchant seaman and sojourns in Mexico, Sweden, and Spain, with dreams of becoming one of the greatest black painters in the world. Today, he says he is ‘as good or better than a lot of cats back there or over here, and sooner or later people will find it out.’ Many people already believe that. They have bought and praised his collages and other works, and the commissions come in every day. Now Middleton has several suitcases, a duplex/studio apartment, a plush office near the center of Amsterdam, and a country house thirty-five minutes by car from the city. He also has two sons—Marcus, 20, who lives in Stockholm, and Sidney, 17, who lives with his mother in Amsterdam. There was a marriage and a divorce.”

According to his obituary, Middleton remarried, gained a stepson, and had another child. He is survived by his wife Hansje Kalff of Schagen. Over the course of his career, he taught at Atelier 63 in Haarlem and the Royal Academy of Art in ‘S-Hertogenbosch and exhibited regularly in Holland. The Van Bommel Van Dam Museum in Venlo, Netherlands, organized a retrospective of his work in 1997.

MIDDLETON MAINTAINED CONNECTIONS and a presence in the United States, too. Williams wrote: “He is pleased to be a black American, maintains his passport in good order, travels home to New York, hosts countless Americans, many of them black…”

Early on, in the late 1950s-60s his work was shown in major U.S. museums. He was featured in “An Ocean Apart: American Artists Abroad” (1983) at the Studio Museum in Harlem. His work can be found in the collections of Fisk, Hampton and Howard Universities. The Whitney Museum of American Art also owns his work. “Out Chorus” (1960) was presented in the Whitney’s 1962 exhibition “Forty Artists Under Forty” and more than 50 years later, appeared in “American is Hard to See,” the 2015 collection exhibition inaugurating the museum’s Renzo Piano-designed building in the Meatpacking District.

“Rife with energy and spontaneity, clear relationships exist among the abstract watercolors and mixed-media collages on view. The artist’s life experiences are expressed in the works through references to jazz, boats, the sea, and Dutch landscapes.”

Gavin Spanierman is managing director of the gallery. I asked him how the exhibition came about and inquired whether the gallery represents Middleton’s estate. He said it does. He told Culture Type that he learned about the artist from a collector.

“The work was introduced to me by a collector friend of mine who asked me to look up the imagery on Google images. He said he was friendly with Sam’s widow and if I were interested in the work he would set up an appointment for me to go and visit with her in Amsterdam. In talking about Middleton’s work, he points out aesthetic connections with Kline, Motherwell, and Mondrian”.